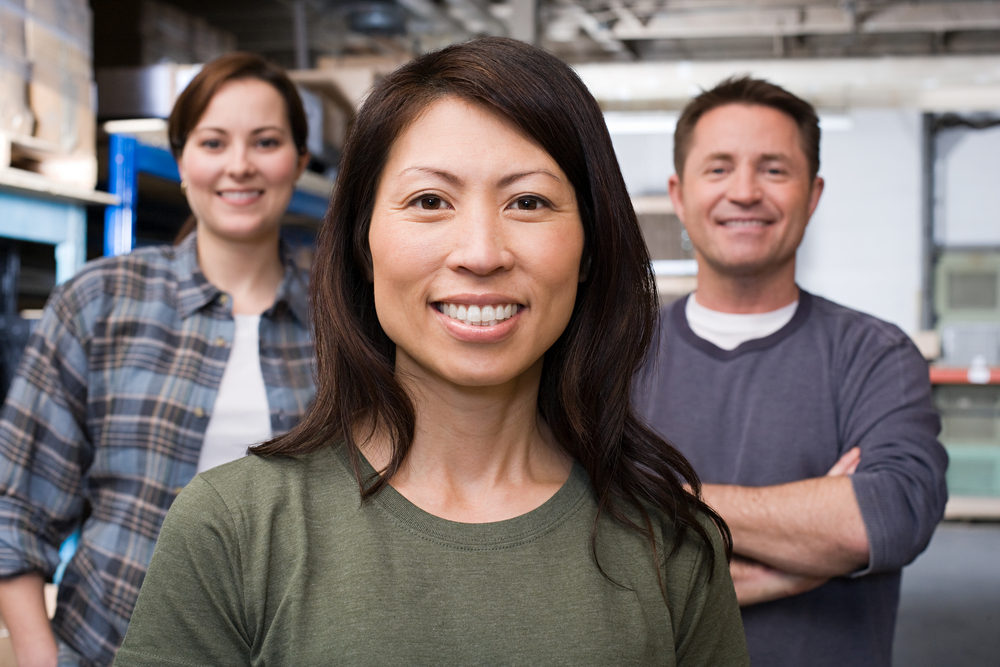 This is a remarkable story about how to resolve workplace conflict with mindfulness and empathy. There are many bridges to cross in this challenging relationship: differences in language, culture, gender, education and values.

As you read about Jade and Mike’s relationship, I want you to imagine what you would do in this situation? I hope this story might surprise you.

Jade is Korean, 147cm tall, a quiet, neat, polite and conscientious woman. She is well educated, has lived and travelled overseas extensively. She worked originally as an artist, but as her English was only just developing, her first job in Australia was as a Machine Operator in a plastic moulding factory.

Mike is brash, shaggily-bearded and at 175cm, a whole 30cm taller than Jade. He is the Die Setter, responsible for the first call with problems for any of the 9 machines on the factory floor. Mike speaks rarely, but when he does, it’s with a voice like gravel rash. He loudly shares his long-suffering irritation, littered with obscenities. Mike has worked in factories all his adult life.

Being new to factory work and motivated to perform well, Jade asked lots of questions about quality problems, or defects, to Mike’s continued annoyance. He was busy, he made that clear and he snapped at any request for machine assistance. His first response was generally “F**k!” … then a mutter “F**k, not again!” and quite often followed it by “It’s not my f**king job”. And to finish he often added  “You are too f**king fussy!”.

Mike liked to leave work right on time, so any machine problems towards the end of the working day were always greeted with “F**k, not this f**king problem!”

Jade became increasingly anxious at the thought of having to call on Mike. She would heave a sigh of relief when she noticed Mike was in a good mood. Or when he was not so busy and cared more about being helpful, even though it not with much apparent happiness. On rare occasions Mike even made a joke, but this only made Jade more uncomfortable.

Jade was told by the co-workers “Don’t take Mike personally, he’s always like that”.

Things escalated when Jade’s machine had consistent problems for several days in a row. Mike became progressively short-tempered each time Jade asked for help. Late on the third day, the machine had problems again and nervously Jade called for help. Mike shouted at Jade  “F**k, not you again!” Go get f**ked!” and stormed off. Jade felt so scared and shocked and totally disrespected by his anger. She cried. Another worker overheard what happened and said “If I were you, I’d sue him”.

Jade didn’t know what to do. She wondered whether there might’ve been a formal complaint made in the past about Mike’s behaviour, he might have been ‘told off’ a couple of times, but she wasn’t sure. Other operators said “Don’t bother complaining, others have left because of him. He won’t change!” The comments from her co-workers led her to think it wasn’t worth raising concerns.

That night Jade reflected deeply. She was a Buddhist and she wanted to use the core values of her practice to challenge this conflict. Jade meditated for over an hour, chanting to find empathy for Mike’s situation and change the dynamic between them.

I don’t want to be locked into being the victim

“I did not want to be locked into being the victim, although that’s how I so strongly felt. I cried quite a lot during this time, about how powerless I felt” Jade said. “I wanted to see the situation more clearly and understand Mike’s perspective. When people are full of anger, it’s a sign that they are suffering a lot in their own life. Their angry behaviour is a way to protect themselves from being close to others.”

Jade really struggled to think about Mike’s well-being “It was hard work to think that he deserved to be happy when he was making my life so miserable. My heart felt scratched by his words, but I realised that there has to be some reason, some message in my struggle, and it forced me to find more strength and be a better person.”

“If I was going to change from being the victim, I needed to create something of value from my own anger and fear in this situation. It was clear it was my challenge to be the one to change, to be assertive and confident in this difficult situation”.

Jade continued to use this deeply reflective practice each day for over two weeks to find a way forward.

I’m determined to be strong, friendly and calm, no matter how he behaved

“I realised nobody liked Mike. He didn’t have any friends in the factory and he was very alone. I also realised my fear towards Mike just made things worse” she said. “I wanted to feel in control”.

“I was determined to be strong, friendly and calm no matter how he behaved. When he swore, I tried to stay calm, listen and wait until he stopped. Then I’d say “Yes, I understand you’re busy, but could you please help me”. If Mike continued on that he was too busy, I was determined to stay firm. “OK, if you are too busy, then who is the best person for me to talk to right now”.

In that way, Jade began to regain confidence in her interactions with Mike. A couple of weeks later Mike, again in a bad mood, shouted at her “Go away, I’m too busy.” Jade decided to speak up. She went to the Factory Manager saying “Mike is too busy, please help me solve this problem, who can I talk to?” About an hour later, Mike came to her and for the first time said sorry. He apologised for his bad mood.

Jade said “Thank you. I saw you were stressed with the amount you had to do”. Then for the first time, Mike started to talk to Jade.

Over the next 12 months, Mike and Jade talked more frequently. Mike started to talk about TV shows he liked, they shared interests in food from different restaurants, sometimes they shared different snacks at work. Mike even talked about his activities with his girlfriend.

Mike could still be abrupt when stressed, but with less anger and Jade wasn’t so bothered. She said she saw more of the person behind the barrier.

“I saw Mike was capable of love and fun. He’d talk about presents he’d buy for his girlfriend. I could see his face light up when he talked about her. It helped me take a wider view of the situation. To move away from feeling like a victim, you need to see the whole person in front of you.”

Jade felt there was now more trust between them and a sense of value for each other. Jade said she even had a kind of fondness towards him.